Rodeo has had a longstanding problem with keenness and hesitancy. He has a tendency to rely on me too much, stopping in his outrun and looking back at me for encouragement. Then, when I gave it to him, he would often “bust” the sheep, running frantically at them and sending them scattering before eventually rounding them up again.

Taking a cue from my former profession, I looked at things from what chemists call ‘first principles.’ What was really going on here? What could I infer from his behavior? He was hesitant. Or to put it another way, he lacked confidence in what he was doing.

That was my diagnosis anyway, for whatever that was worth. So I formulated a plan. I would do everything I could to build his confidence – putting him in a position to succeed wherever I could, and if he struggled with a situation, I would lay him down and run out to help him.

But it wasn’t all cheerleading and helping hands. If he lost his head and busted the sheep, I would run at him and give him a serious dressing down. I was going to make it absolutely clear that this was something You Do Not Do.

I initiated this strategy back in June or so, and pretty quickly I saw an improvement in that he had less of a tendency to bust the sheep (after a few times running out after him to make my point). I first noticed a change when, at the end of an outrun, he lowered his head and started to speed up, which I had come to recognize as the sign that he was about to go cuckoo. I started shouting and running out towards him to deliver a correction, but then I stopped short. His head had come up, he’d slowed down, and he was proceeding with a nice lift.

So that was good. But he still had a tendency to be hesitant on his outrun, stopping midway and looking back at me.

This week, something changed. Tuesday is normally lesson day with Brian, but I was picking up a friend from an outpatient medical procedure in Seattle, so I couldn’t make my usual lesson time. But I brought the dogs anyway and decided to stop and do some training on my own on the way back.

I started with Rodeo. When I sent him, he had to go through an open gate between two fields to get the sheep, which were in the far field. He got as far as the gate, then stopped and looked back at me. I gave him a few flanking commands to get him going again, and he finally brought them to me. It was typical of how he has been for awhile.

And then everything changed. I sent him again with the sheep closer, and he surprised me by zipping off at full speed. No hesitancy at all, and his stride and bearing just exuded confidence. I repeated the exercise, having him fetch the sheep out of corners of the field, where he often has trouble. He continued to zip around each time, not stopping once.

Then I noticed something else. To set up the outruns, I had him drive the sheep into the corner. Suddenly, he was a driving fool. He confidently walked up on them, covered when they deviated from a straight course, and didn’t look back at me once. He got them to the corner and seemed ready to just keep pushing them until I called him off.

He was a good 50 yards ahead of me on the drive at one point. It was the best driving I’d see him done in a year or more, possibly ever.

The whole session was a quantum leap for him. It was as if I were doing pushups and went from being able to do 15 one week, to 16 the next, to 17, and then suddenly to 50 the week after that.

It remains to be seen if this newfound confidence and keenness will continue, but I am certainly encouraged. Hopefully it’s a sign that my new strategy with him is paying off.
Posted by Unknown at 10:06 PM 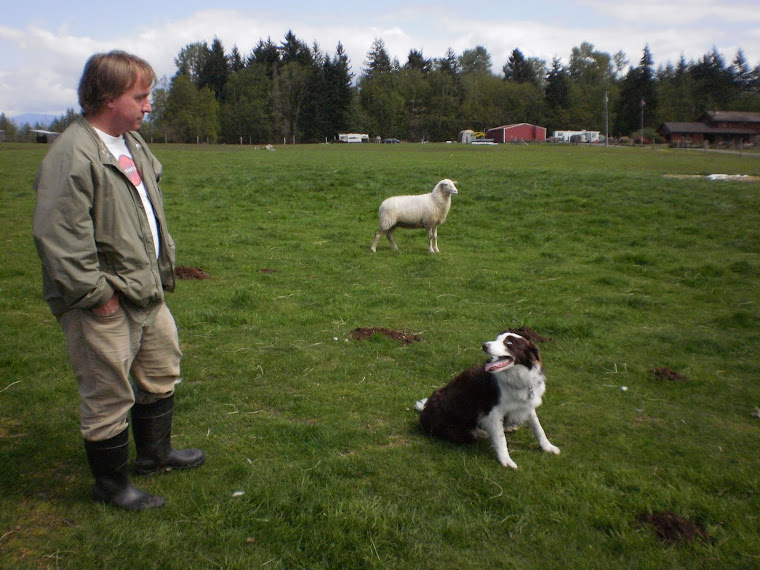 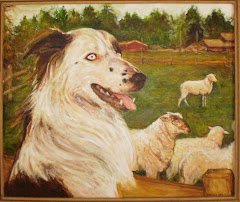 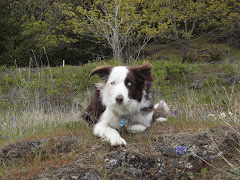 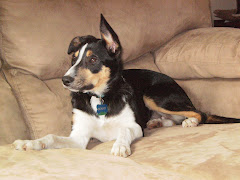